In what ways are objects important to my practice? I often draw on paper that as material is loaded with inference. Shopping lists on scrap paper collaged into other paper detritus from retail expeditions.
I use other altered, found, natural and non-objects. As source of ideas and also as material.
Working conceptually or should I say making conceptual art or should I say conceptualising conceptual art..?  adds a complexity to the idea of object (reflecting back on the recent tutorial where the presentation/display of the concepts is a problem) and how does this explore the 'danger of reification (the thing-ifying of cultural processes)'?

An exercise in ekphrasis:
I noted I used a technique of finding a way in to reading the object, not dissimilar to looking at an artwork when I began to write about this object. It's useful to step back from what is familiar to objectify it and then really understand its visual language. Something I don't often do with my work. The familiarity carries a lot of assumption about what is being communicated. To look at it objectively (and that requires consciously using devices like this) exposes these assumptions.

The slide is old.  There is a crack in it which adds a vulnerability to its already fragile tense (it’s glass).  The writing is ornate, cursive and dated. (although there is no actual date on it).

The description is bizarre and unusual, it says the image captured on the slide is of the ‘trachea of a healthy bee’. This is the only clue to what the image is of.
As you look closely you can see the magnified image of something that looks insect like, biological, microscopic yet enlarged.
As an abstract image its tone creates a 3d illusion. It is in fact in negative. Is a negative.
I'm not emotionally attached to this object.  I could have chosen the lego figure that has vigilantly watched over and entertained my children for years but I picked this up for the exercise. Because it's value is in being interesting, inspiring and curious.  Not in being familiar, nostalgic and sentimental. 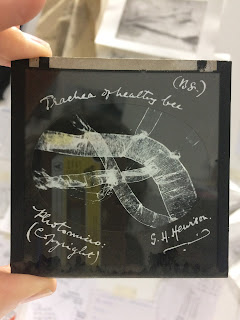 I'm currently blogging over on https://spacegirlproject.blogspot.com/ It's a repository for my developing PhD research The Graphic M...