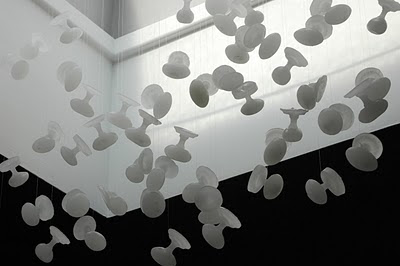 This morning I re-read a paper I submitted for my MA last year. It was a crap essay. Some of the ideas were great but as ever, my execution of anything academic was thwarted by being badly directed and unedited.
I am facing the firing squad again soon for my final assessment and so I am tracing my steps back to my initial intentions to give it all a thorough critical 'going over'.
What was evident in the paper was a concern with materials. Mainly ones that could be termed feminist.
A huge digression into the problems of being a contemporary female artist who would resist the feminist label yet still employ domestic, underprivileged materials ensued. I couldn't conclude. I managed to avoid the subject in my practice by steering away from materials coded with feminist, feminine, connotations. I abandoned knitting, stitching, food and fabric (although I was using them for an entirely different reason to the feminists). The detail of piece above was made with paraffin wax and fishing wire. It was formed from casts of domestic doorknobs. I look at the image now and I still see something vaguely feminine. The piece was to do with Sartre. It was based on the existentialist question of whether we turn the handle or does the handle turn us. As far I thought: genderless.
Despite all attempts to avoid being tagged a feminist I think by placing myself in a gallery, making a tally mark over and over with the suggestion I am trapped or imprisoned can still be assumed to be a feminist action.
The reason I have difficulty with all this is because A: why do we need to deny associations with feminism? and B: Do we just confuse female with feminist?
I referred to Rachel Whiteread and Eva Hesse in the 'terrible essay' neither of whom seem to receive the lowly monica 'feminist'. But then Whiteread's works have a masculine, modernist form and Hesse spent her entire career striving to appear intellectual and not emotional.
As far as my own work goes, I am using the most democratic, non- heirarchical, non-gender-specific materials to support the content but the mark-making still looks girly!
at April 25, 2010 1 comment:

I'm currently blogging over on https://spacegirlproject.blogspot.com/ It's a repository for my developing PhD research The Graphic M...